EFT (Emotional Freedom Technique) is an amazingly simple and effective method for clearing blockages of the energy system and facilitating change. It could be described as a kind of psychological acupressure. We tap with our fingertips on various acupuncture points on the face and upper body whilst tuning into our specific problem or issue, which can be physical, mental or emotional, naming the feelings that arise. The action of tapping on these points clears the disruptions in the energy system and balances our energy meridians, restoring harmony. The client experiences this as a rapid dissolving of negative emotions, painful sensations and tension. Whilst the exact action mechanism of this amazing technique has not yet been fully understood, I hypothesise that beyond the effect on the energy system, which is attributed to the tapping on the acupuncure channels, there is also an effect on the brain itself: The feeling of the emotions activates the limbic system (i.e. the emotional part of the brain) whilst the naming of feelings activates the prefrontal cortex (i.e. the rational, 'higher' functions) at the same time. This seems to harmonise these different parts of the brain and facilitates a reprogramming of the Amygdala, the part of the brain that determines whether something is dangerous or not and triggers the fight-and-fight-reflex. This effectively reprograms the fear threshold (or any other trigger threshold), which would be a model of explanation why the technique can be so successful with PTSD, fears and phobias. Therefore, EFT can be considered a truly holistic 'multidimensional' method as it integrates the energy system (acupuncture channels), the sensations in the body, the emotions as felt through the limbic system and the understanding in the prefrontal cortex. For scientific research on EFT, please click here.

How do I use EFT?

I offer an integrated approach to Energy Therapy, synergistically blending Energy Psychology/EFT with mindfulness, hands-on healing and other therapeutic modalities (such as Neuro Linguistic Programming) where appropriate.

"For me this whole experience has been completely life changing. I have spent the past twelve months on a journey of self-discovery in to the depths of myself and my emotions. EFT with Andrea has been like working with a highly skilled archaeologist. Each session has been an investigation into the locked parts of me, like caverns which were previously inaccessible. These caverns have been filled with jewels, the jewels being my emotions, which I had been cut off from for a long time. I have been able to find the treasure and begin to embody my authentic self. She has gently held my hand along this path of healing and realization and has guided me to shine a light in the dark, a light that continues to shine brighter as I move closer toward self-acceptance."
R.E., Youth Worker, North London
I hold a safe space of unconditional acceptance and guide clients through a process of becoming aware of their toxic beliefs and emotions, facilitating the release of emotions, trauma and patterns which do not serve any more. This is deeply transformative work which allows the client to find a new perspective, to re-frame and gently shift from Ego consciousness to Essence, from Fear to Love – a state where healing, peace and forgiveness become possible. The process resolves issues at the deepest level, re-establishing harmony on all levels of our being, including the physical.

My expertise lies in working with clients in the areas of trauma (often the small “t” trauma from childhood which we don’t even recognise as such), childhood abuse, self-harm, low self-esteem, fear of change, procrastination, depression, stress, anxiety and spiritual crisis.

I have also work with clients suffering from physical issues including ME, chronic conditions, eating disorders, digestive problems, skin complaints as well as acute and chronic pain.

What are the benefits of EFT?

EFT is easy to learn and to use to release negative feelings whether they are emotional or physical, and whether they refer to the past, the present or the future.
It has been used successfully on a whole range of issues including natural pain management, panic attacks, anxiety, low moods and self-loathing, stress, addictive behaviours, post traumatic stress and developmental trauma, weight loss, performance enhancement and many more. It is particularly effective with trauma and any kind of negative memory. Typically, the memory itself will remain intact, but all the negative emotional charge that was stored with it will dissolve, usually permanently.

EFT is also a wonderful means to come into awareness of the patterns and beliefs with which we are limiting ourselves and to release and replace them by more positive, empowering internal messages. Thus it is also a powerful tool to overcome subconscious blocks to healing and to accelerate any process of change and transformation.

EFT can and sometimes does produce instant successes or one-shot wonders. However, long-standing and major physical or emotional problems usually need to be resolved layer by layer and require persistence and a skilled therapist to guide and support the process. I have found that using EFT either as a main therapy tool or in combination with other Energy modalities always accelerates the process of awareness, release and healing. It can be very beneficial to conclude an EFT session with a hands-on healing phase to deepen and integrate the powerful and lasting shifts and changes that have happened. Because it is so easy to learn I invite my clients to learn the basic EFT routine themselves, so they can have this incredible tool “at their fingertips” whenever needed – it’s truly empowering!

Visit the EFT Universe website for more information, a guide on how to tap and links to a wealth of scientific research papers on EFT. 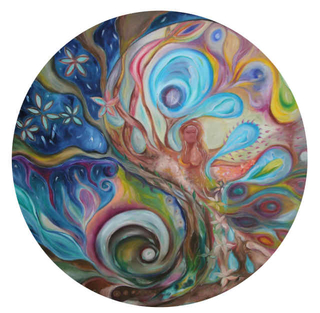 Next Meditation Course:
There is currently no live Mindfulness for Everyday Life course but I am planning an updated online version soon. It is likely to be an entry point for the online Diploma as well. Do contact me if you are interested.

Stop Press:
The one-year Level 3 Diploma in Practical Spirituality and Wellness 2020 was cancelled and William Bloom is currently pioneering an online version. For more information click here or contact me directly